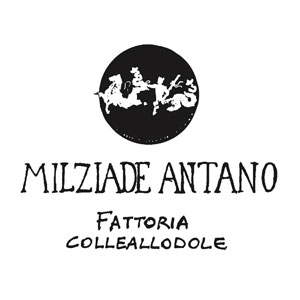 The history of Fattoria Colle Allodole of Milziade Antano is typical of the farming family. The farm belonged to Milziade Antano, one of the "historical" producers of the Montefalco area, who personally managed it. After his premature death, the management passed to his heirs. Milziade worked as a sharecropper on Umbrian farms, until, in 1969, he decided to buy 30 hectares of land, starting the planting of vineyards, and the breeding of Chianina cattle. In 1975 there was the first production of Montefalco Rosso and Sagrantino Passito, to which Sagrantino Secco was then added, and, in the 80’s, the refinement in bottle began. Francesco, the young son of Milziade, sharing the same passion for land, soon decided to follow his father's footsteps, supporting him in running the farm and, in 1997, he produced for the first time the Sagrantino Colleallodole DOCG.

This Sagrantino, which has become the "CRU" of the Farm, is made with grapes coming from a vineyard with particular characteristics, and its denomination derives from a fancy name Colle Allodole, inspired by the migration of the larks that, in the month of October, have always crossed hillocks and slopes of these hills. Francesco, rich in the experience gained close to his father, continues the work, in the tradition of the territory, using the ancient and always current ways of winemaking, with meticulousness and constancy, and just only part of the means that technology has available. He started this work with passion, since his young age, and he loves the learning of the craft of winemaker.

Francesco's philosophy, faithful to his father's teachings, is that quality begins with the land and the care given to the cultivation of the vine, which distinguishes Fattoria ColleAllodole from others present in the Montefalco area. The care with which the phases of pruning and harvesting the grapes are carried out is very high, with careful choice, both the workers and the period in which the work in the vineyards is carried out. Fattoria Colle Allodole currently has an extension of 40 hectares, 12 of which are cultivated with vineyards. The Fattoria is a member of the Consorzio tutela vini di Montefalco.

Fattoria Colleallodole is located on the hills about 1 km from Montefalco, in Bevagna, Vocabolo Colleallodole.